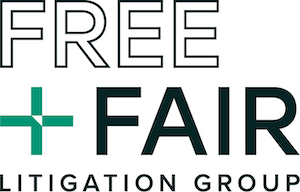 NEW YORK – Carey Dunne, Mark Pomerantz, and Michele Roberts – three of the highest-profile attorneys in the nation – today announced the formation of FREE AND FAIR LITIGATION GROUP, a first-of-its kind, non-profit law firm designed to counter the new authoritarian threat to our democracy and individual rights. FREE AND FAIR will select up to ten cases at a time, based on their potential to create new case law that bolsters our democracy. All of its cases will be nationally significant, and some may reach the Supreme Court.

“The radical authoritarianism rising in our politics is gaining a foothold in our courts,” said DUNNE, POMERANTZ, and ROBERTS. “Courts have rolled back fundamental rights that existed for decades, and the democracy that we once took for granted faces existential threats.”

“Free and Fair is a non-profit law firm designed for this moment. All of our cases help guarantee free and fair elections and restore long-held, constitutional freedoms. We are advocates for a democracy in crisis.”

In Trump v. Vance, CAREY won the most consequential Supreme Court victory for the rule of law – and against authoritarianism – in a generation. After obtaining the former President’s tax records and leading an unprecedented investigation, CAREY and MARK secured authorization to pursue an indictment, and resigned their government posts when their grand jury presentation was shut down.

FREE AND FAIR’s full founding team and Board of Directors are listed at freeandfairlitigation.org.

FREE AND FAIR will bring and defend up to ten constitutional law cases at a time, based on their national significance, centrality to core democratic principles, and potential to halt the “originalist” judicial assault on our rights. The firm will remain small, focused, and selective – with none of the politics, conflicts, and bureaucracy that constrain larger firms and non-profits.

FREE AND FAIR will work pro bono, without charge to its clients, and its founding principals will not be paid. The firm will handle some cases independently, and in others will provide senior leadership in partnership with for-profit law firms and larger non-profit organizations. This is the firm’s only work – it will not participate in public advocacy, lobbying, research, or the kind of incremental or partisan cases at which other firms and non-profits excel.

WHAT: FREE AND FAIR selects cases based on their potential to create new, nationally significant case law that protects our democracy and fundamental rights. Matters in development include:

FREE AND FAIR has been recognized by the IRS as a 501c3 organization, and contributions are fully tax deductible. The firm is raising funds to recruit between five and seven top litigators and a lean administrative team. FREE AND FAIR has already raised more than $1.6 million. Contributions can be made at freeandfairlitigation.org.